1. What’s your favourite kind of weather?

It depends what I’m doing really. If I’m doing something outside, I like the weather to be sunny but not too hot because it gets a bit uncomfortable after a while. If I’m inside, I love listening to the rain beating against the window and the wind howling outside.

I’m from Ireland, so the thing people always complain about is the rain. It is right on the edge of Europe so we get lots of rain rolling in off the Atlantic. However, because we are an island it means that we don’t get very harsh winters and it hardly ever snows. I think temperate is the word to describe our climate- not too hot, not too cold.

3. Does the weather effect people’s lives in your country?

Yes, very much so. In the winter it is really grey all the time and it gets dark very early in the afternoon. The lack of sunlight leads to some people getting a bit depressed and I imagine that’s why people drink much more wine and whiskey in the winter to cope with how dull everything is.

4. Do people change in the summer?

Absolutely, as soon as the sun starts to shine and it gets warmer, people start to have barbecues, do more outdoor activities and are generally happier. Unfortunately, it doesn’t last very long but people definitely make the most of it while the weather is good.

5. Is there any type of weather you really don’t like?

6. Does bad weather ever effect transport in your country?

As I said before, it rarely snows, but when it does the transportation system collapses. People are just not used to driving in the snow and the whole country pretty much grinds to a halt. Buses and trains normally stop running completely until the snow thaws. 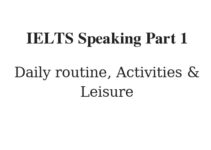