You should say:
–  Who this person is
– How long you have known him/her
–  What qualities he/she has

I would like to describe one of my teachers who taught me at high school. She had a great influence on me and was a role model whom I look up to.

Her name is Yen and she taught me Math for 3 years of high school. She was in her 50s, and so she had a lot of teaching experience. Actually, we met each other almost everyday as she was also my form teacher. She cared about us as if we had been her sons and daughters. For example, she always brought some kinds of medicines so that whenever her students got a cold, coughed or something like that, she would give them the medicines immediately.

Above all, I was most influenced by the way she taught us in class. Her thoroughness in teaching inspired me to study Math, even though I had not been interested in the subject before. Thanks to her effective teaching method, I was able to pass the university entrance exam with a high Math grade. Besides, I was also influenced by her lifestyle, which was so simple and worthy of respect that I really wanted to copy her. As she is a warm-hearted person, she always gave us advice about any problems we faced. At times, I felt that she was like my friend who I could share everything with.

Although we have now all graduated from high school, my friends and I often visit her at the weekends to tell her about our daily life at university.

– role model: [noun phrase] a person that you admire and try to copy.
Example: Parents are usually the most important role models for a child.\

– cared about: [phrasal verb] felt that we were important and worth worrying about.
Example: Everybody had a good opinion of the hospital – the doctors and nurses really cared about the health of the patients.

– thoroughness: [noun] the quality of doing things very carefully and with great attention to detail.
Example: The report was perfectly organised and included every important detail, and I had to admire his thoroughness.

– lifestyle: [noun] the way in which a person or group of people live and work.
Example: When I moved to the countryside from Hanoi, I had to change my lifestyle completely.

– warm-hearted: [adjective] kind and generous
Example: He often gave money and chatted in the street to poor people that he knew – he was a very warm-hearted person. 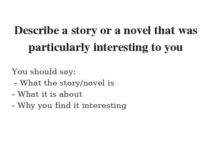 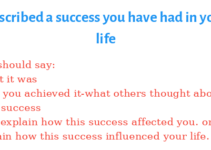 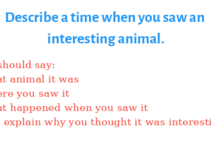